I research binoculars a lot. And every so often (very often actually), I stumble upon these products with unbelievable claims, and in particular I’ve been noticing lots of “60x60 binoculars”, which annoys me quite a bit.

60x60 binoculars are almost certainly a lie and even if it were true, they’d be impossible to use.  Using these ludicrous numbers is a marketing gimmick and is meaningless, especially if they’re also cheap.

What does 60x60 mean in binoculars?

Here’s a quick intro into how binoculars are rated and what the numbers mean.

The first number (before the ‘x’) means magnification.

A 60x binocular would magnify things 60 times, or make them appear 60 times closer. A human 60 meters away would appear as if standing just 1 meter away.

If you’re not sure what that means, I’ll tell you – that would  be HUGE magnification, the kind used on some serious astronomical telescopes.

There a few problems with such magnification:

The second number (after the ‘x’) stands for the object lens size.

The big lens in the front of your binoculars is the objective lens. So this number shows its diameter in mm.

A 60mm lens is not unreasonable, though quite large for “normal” binoculars. Common lens sizes for full-sized binos are 42mm and 50mm.

A 60mm lens would mean a pretty big binocular. A pretty heavy one too.

Frankly, it’s unlikely that any of the binos sold with these stats actually have such big lenses.

Could 60x60 mean something else?

In the binoculars world, not really.

I mean, the (magnification) x (lens size) format is so ingrained in usage in the optics industry, it would be dumb and confusing to use it for anything else.

What else could it be?

Or in fact, it means they are trying to trick you. It’s a marketing gimmick. They’re trying to use these huge numbers to look more impressive than all the competition.

I can’t say this with 100% certainty, but I’m pretty sure that’s what they’re doing when they put such insane numbers on their products.

I’ve also noticed with some models, they say 60 x 60 in the titles, but in the details section it actually says something much more reasonable, like 7x50. Here’s an example:

And frankly, people who don’t know much about optics will often buy these binos. They might be happy with the purchase or they might not, but oftentimes, they won’t even know that they bought something that’s not what it says it is.

I see reviews and questions where people doubt whether what they have bought actually has 60x magnification. But in many cases people aren’t sure because they don’t real world experience with proper binoculars.

In any case, I would say that labelling products like this is in very least misleading and possibly even verges on fraud.

How do I know if this sort binocular is any good?

Of course, just because a product is described in a misleading or outright false manner doesn’t mean it’s not a decent product, right?

But the problem is this: If you know the seller is lying about one stat, how do you know what other parts of the product listing they might be lying about as well?

Here are some things that are common among binoculars labelled “60x60”:

So when these products state that they are “waterproof” and “fog proof”, is it really true?

Frankly, I believe (not claiming anything with certainty here) that if you stuck many of these models in the bathtub for a minute, they’d be full of water.

And then you might also see claims of “night vision” on many of these. Well, clearly they are not true night vision devices – you can’t get those for $30 – but maybe they mean to say that have good optical performance in low light conditions. Well, honestly, I doubt that.

To get great twilight performance, you need superb optics (glass, lens coatings etc), and a large objective lens diameter compared to the magnification (something known as exit pupil). And these “60x60” models have none of that.

If they lie about the most fundamental statistic that describes a binocular, they probably lie about other stuff too.

I’m on a budget. Which binoculars should I buy instead?

The one issue with buying binoculars is that there are just so many to choose from and frankly, they’re tend to be pretty similar.

But here a few tips:

If you’d like a specific recommendation, you can have a look at these: 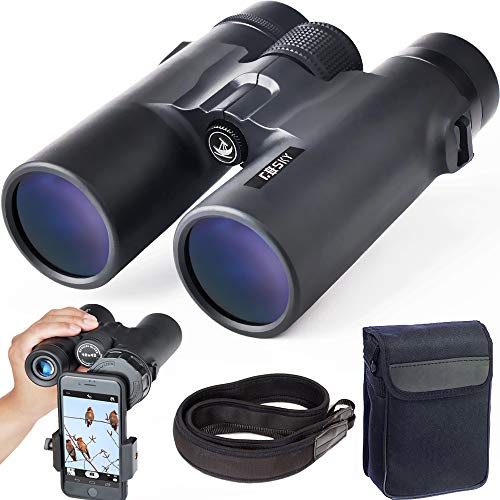 Gosky makes good low-cost binoculars that have been hugely popular among people who don’t really need the quality of higher-end brands.

You can use these for birding, hunting and just generally enjoying nature. Don’t expect to be blown away, but they’re very good for the price.

We’ve seen that there are sellers out there who employ quite deceitful ludicrous nonsense in order to get more sales, and this is sad. So my goal is to educate people about optics and make sure they know what they’re buying.

I hope you’ve found this article useful. If you decide to buy those 60x60 binoculars nonetheless, well, let’s just say I hope you get lucky and they are actually worth the cost even if their description has nothing to do with reality.