Note: Prices change, so the products mentioned below may not be priced below $400 at the time of reading. To know the exact price, just click on the product you’re interested in.

Spotting scopes are becoming increasingly popular among outdoor enthusiasts, and that includes birders, hunters, target shooters, and people who love to watch wildlife.

You want to buy a spotting scope, but you’re probably on a budget. Let’s say right away that $400 is a decent budget to work with. You can get a pretty good spotter within that range, one that will fulfill most people’s needs. It won’t be a high-end model, but those are in the four-digits price range. But a spotting scope under 400 will be much much better than budget optics.

Here are a couple of things you should know so that you can choose the best spotting scope under 400 dollars for yourself:

Now that you’re armed with basic knowledge of what to look for, let’s have a look at the top spotting scopes under 400: 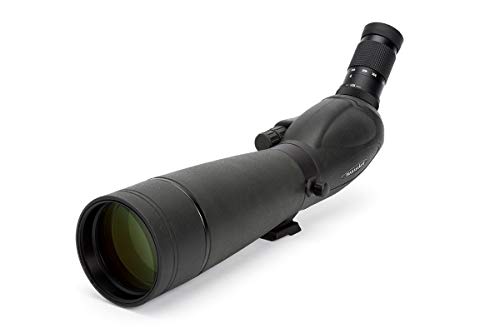 Celestron is a big player in the world of optics and this spotting scope is one of their most popular ones. If you go over to the Amazon page, you can check out the user reviews at the bottom – and the overall sentiment is that it’s an excellent scope for its class. It’s widely used for target shooting, astronomy and birding. It may be a little bulky for a hunter who needs to carry the device with them on long treks.

Note that there are several configurations available: 65mm, 80mm and 100mm. The 80mm is probably the most reasonable one to get and typically can be acquired at less than $400. You can also choose between angled and straight variants.

The optics on the scope are very good, with BaK-4 prisms and fully multi-coated lenses that use Celestron’s own XLT technology. People have compared this model with multi-thousand dollar ones and say that the latter ones are only marginally better, so that says a lot.

The main downside is the physical size of the thing. You will need to decide how much that matters to you for your particular use. 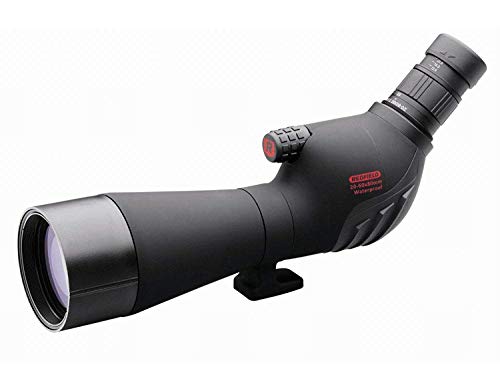 Redfield is not a very big brand, but their optics have certainly found a niche among enthusiasts. This scope has been used successfully by hunters and at shooting ranges, and is known for its great value for the money.

The lens is a nice big 80mm and the zoom works in the standard 20x – 60x range. People who have dropped or bumped the scope have reported that it’s pretty rugged, so it should work well on all sorts of outings into the nature, seeing as it’s also waterproof and fog proof.

On the whole, users seem to be happy with the quality of the image, though a few have reported serious issues. It seems that occasionally, the products end up damaged during transportation, so that may be the reason. Luckily, the manufacturer will exchange it for a new one no questions asked. 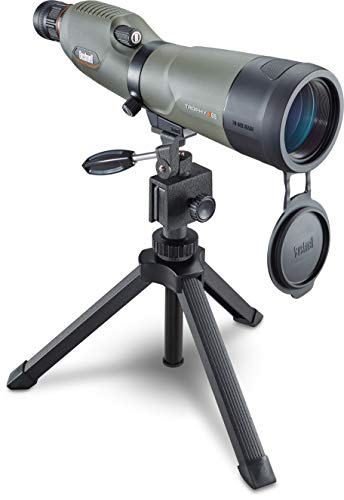 It’s possible you want to have a smaller spotter scope than the ones listed above. The Trophy Extreme is an excellent product by Bushnell – one of the top brands in the field of optics.

The scope comes in two configurations: 65mm and an even smaller 50mm. The latter one can already be classified as a compact spotting scope, and the former one is kind of mid-sized. In any case, the scope is well built and is waterproof.

Note that this scope is a straight one – the eyepiece is parallel to viewing axis. This is useful in many situations, e.g. viewing from a high support, viewing from a car, or from a prone position. Since this model is quite small, you can also use it handheld if you manage to support your hands in such a way as to keep the image stable. A nice feature of the Trophy Xtreme is the rotating eyepiece part. You can swivel the whole posterior half of the scope down to bring the eyepiece closer to the ground – which can make the viewing more comfortable, depending on your situation.

People use this scope extensively at shooting ranges, for birding and for hunting, so it’s a very versatile tool in its price bracket. 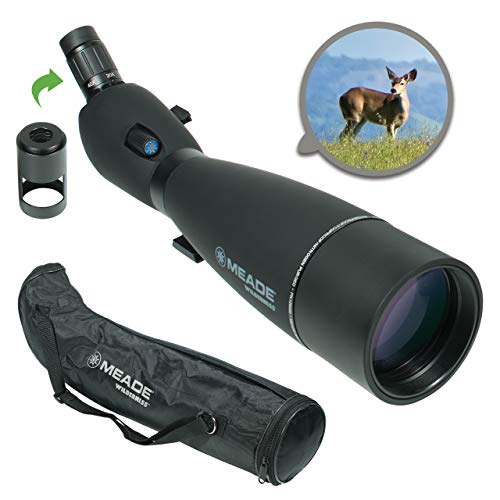 Lastly, I wanted to throw in this model, which is in a whole different size class from all of the above: it has a whopping 100mm objective with a 20-60X zoom.

It’s big, sure, but it’s fantastic for detailed prolonged observation out in the wild: a perfect instrument for birders and wildlife enthusiasts who don’t want to invest too much into their optics just yet. The benefit of the huge lens becomes apparent in the bright images it produces, helped by the BaK-4 prism and multicoated optics. It also comes with a camera adapter, so you can use it as a giant lens for your camera.

If you want to a scope for outdoors observation and maybe even some astronomy, definitely have a look at the Meade Wilderness.

At the time of writing all of the products reviewed above were available for significantly less than $400 and they’re definitely some of the best spotting scopes under 400 dollars. Of course, you can get better optics by choosing to pay more, but if you’re on a budget, then these are worth having a look at. Hopefully you will figure out what your requirements are, especially as far as size and layout goes, and then it will be much easier for you to make a good buying decision. Good luck!