This question arises from time to time and it’s hard to find a definite answer: What are the best American made binoculars on the market right now? In fact, are there any binoculars that are actually manufactured in the US?

The vast majority of optics manufacturers produce their optics in East Asia: most commonly China, sometimes Japan, and sometimes Philippines or South Korea. Even most producers who originally assembled binoculars on US soil have by now moved the production to China. It’s not a problem in itself, as long as strict quality controls are maintained. But, as we all know, they’re not always maintained and very often, when production is moved to China, the quality decreases and the number of defective products rises.

There are plenty of companies that are based in the US, but whose production all takes place in Japan or China. These include Leupold, Vortex and even Athlon Optics.

But that doesn’t count as “Made in USA”, does it?

So what’s the verdict?

After significant research, I ended up finding only one manufacturer who actually assembles its top models in the United States. Thankfully, they’re also a great manufacturer and their products are some of the best, if not the best, for the price. More about that later.

Anyway, that company is Maven.

You may have never heard of the brand, and if you have, it’s probably been only positive. The thing is that they’re a relatively small optics manufacturer, but they focus on building very high quality products for a lower price. They achieve that by using a direct-to-consumer model, which means they completely avoid retail middlemen and can deliver products at a much lower price than most competitors. Great as far as pricing goes, but it limits their distribution and people’s awareness of the company.

Let’s make one thing clear: not all Maven binoculars are assembled in the US.

To be specific, their B-series of binoculars are American made, actually assembled in San Diego. This is their higher-end series and it’s a fantastic series indeed. It has been compared to high-end German products, like those from Swarovski and Zeiss, while the price is much lower.

Let’s have a closer look the products in this series: 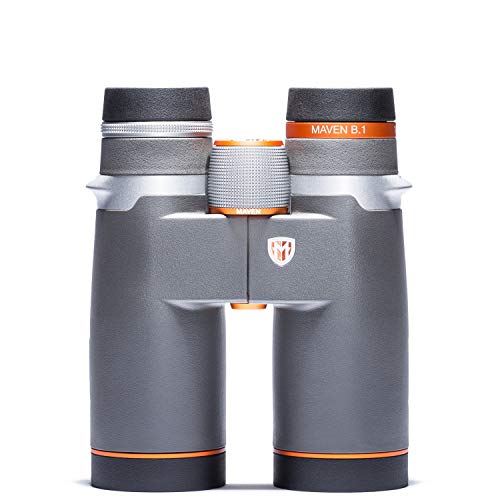 The B1 is a standard size bino with 42mm lens and it comes in two options: with 8x magnification as above and with 10x magnification.

As all binos in the B-series, it uses the best glass available, with superb lens coatings for maximum brightness and contrast. The B1 is a great general purpose bino, and will be loved by hunters, birders and anyone else who just needs an excellent binocular. 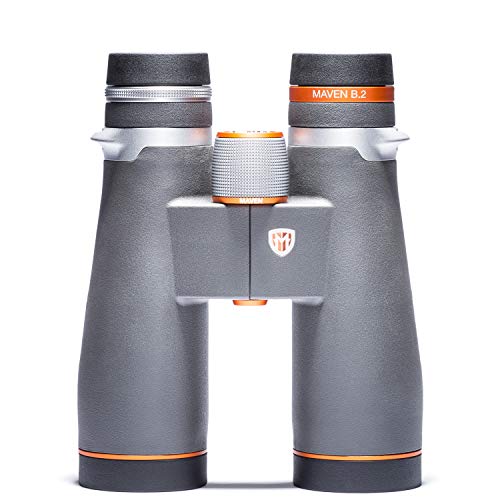 The B2 is a beast. It uses bigger 45mm lenses and, in addition to the one above, comes in 9x and 7x variants.

The exceptional thing about the B2 is its use of Abbe-Koenig prisms that transmit more light than other prism configurations. The bino is somewhat bulkier than standard 42mm binos, but the improvement in image quality is significant. This is a great product for anyone who is very serious about observation, especially when it comes to wildlife. 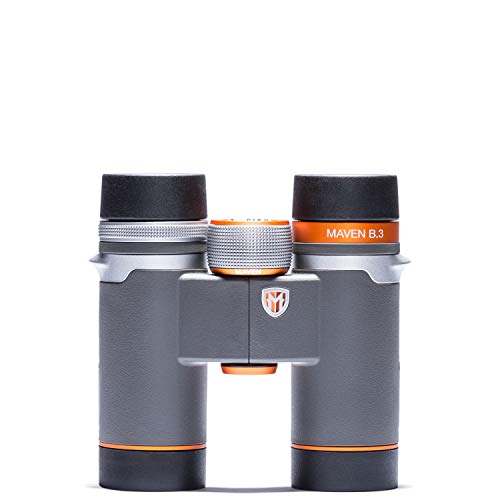 For anyone looking for a compact binocular that provides superb views but is light and small, finding anything better than the B3 will be a challenge, at least within the price. It may be small, with 30mm objectives, but the optics are still amazing: the quality of the glass and the coatings are all what you’ll find on the bigger B-series models. The light weight and compact size make the B3 a perfect companion on all sorts of outings where you don’t need superb low-light performance and such – I mean, the optics are great, but they can’t do magic when the objectives are small.

The above 8X30 version is probably the most practical one. There are also the 10X30 – but the loss in exit pupil seems too great due to the higher magnification – and the 6X30 – which is a very interesting option when you prefer wide FOV and less shake (e.g. for sports games, concerts and the like).

So, this basically covers the B-series by Maven – one of the best American made binoculars series out there, if not the only one.

It seems like if you want to buy US-made binoculars, the you don’t have much of a choice as far as manufacturers go. Fortunately, the one brand that you do have is a top notch one that makes optics that compete successfully with the best of the best and yet cost much less. So, check out the products above, definitely read the user reviews under each of them – they say a lot.